About Gordon B. Hinckley 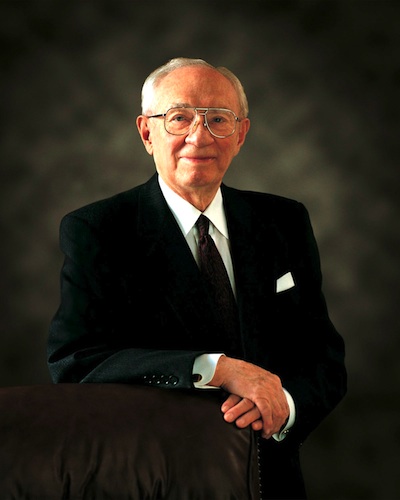 Gordon Bitner Hinckley was born into a religiously dedicated and culturally refined family on June 23, 1910. His parents were both educators - a college president and an English teacher - who helped infuse Gordon with a love of learning. He grew up as a voracious reader, in a home with a library filled with more than a thousand volumes of literary, historical, and philosophical works.
[read more]

Gordon graduated from LDS High School in 1928, and eagerly continued his studies at the University of Utah. Over the next four years he focused his studies on English Literature, and successfully completed an undergraduate degree in June 1932.

After graduating from the University of Utah, he was called to serve a mission to Great Britain for the Church of Jesus Christ of Latter Day Saints, and upon his return embarked on a lifetime of service for the Church. He was employed as the executive secretary of the Church Radio, Publicity, and Literature committee, before he was called to be an Apostle in 1961. He was later called to serve as a counselor to President Kimball, President Benson, and President Hunter.

On March 12, 1995, he was called and set apart as the 15th President of the LDS Church. For this time until his death more than 13 years later, he was revered and loved as Prophet and Seer by 15 million members of the LDS Church. His amazing ecclesiastical legacy includes directing the most intense temple building program in the history of the LDS Church, as well as opening doors and enhancing the public image of the through television interviews and national press publications. He exhibited vitality and energy as he has traveled about the world meeting and speaking to members of the Church.

Throughout his long and amazingly influential life, President Gordon B. Hinckley sustained a passion for learning and literature - a legacy now carried forward by his family. When one of his granddaughters was a freshman in college, he gave to her his much-read and loved copy of The Complete Works of Shakespeare, and encouraged her to use it well in her own academic pursuits. She now retains this as a treasured reminder of the love her grandfather had for learning and for literature.